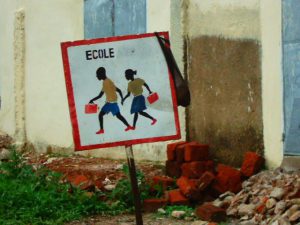 Check out the photo essay developed when working in Guinea, a French-speaking country in Sub-Saharan Africa. Guinea is desperately poor and particularly vulnerable to the impacts of climate change. Sometimes the dirt road at the school crossing is flooded during the rainy season; other times, it is bone dry during the drought periods. Taking these photographs was somewhat risky, as army personnel were ready to arrest anyone with a camera, based on the belief that photographs were likely intended to embarrass the country’s leadership. But a few quick snapshots captured the contrast between the children who were happy to do what few in their region do – go to school – and the extreme poverty in which they live.