Today is America Recycles Day. The Environmental Protection Agency has prepared helpful information for businesses to help us recycle more and waste less. Three areas for action are particularly important for small businesses: the first is green procurement policies. Large enterprises are increasingly “greening” their supply chains; small businesses with eco-friendly policies are more competitive vendors to win contract awards from such large enterprises. Government agencies are also trying to be greener. For example, government agencies that continue to require  that bids be submitted in hard copy often stipulate that the paper on which the bid documents are printed be from recycled sources. Second, eCycling is an important consideration to ensure that hazardous materials from electronic devices do not wind up in the waste stream. At Prisere, we extend the lives of our computers by upgrading media and memory before replacing entire units. Finally, as the holiday season approaches, consider ways to avoid creating needless waste, such as wrapping gifts in reusable bags.

A third and final round of meetings is underway this week in Geneva to agree to benchmarks of success of the Sendai Framework for Disaster Risk Reduction, a fifteen-year agreement reached  by the international community. Sendai is the successor to the Hyogo Framework for Action, that had been agreed to just weeks after the December 2004 Indian Ocean Tsunami. The Hyogo Framework, which was in effect from 2005 to 2015, identified five priorities for reducing disaster risk, but did not set specific targets. Prisere LLC had delivered analysis, reporting and recommendations to the United Nations Office for Disaster Risk Reduction, in respect of implementing the Hyogo Framework in Europe:

During the ten years that the Hyogo Framework was in effect, 130 UN Member States submitted reports on progress made in implementing disaster risk reduction measures. Over that period, countries reported progress on risk reduction policies even as disaster-related losses continued to increase. Prisere LLC argued that the divergence was the result of moving goal posts: countries were making progress in reducing disaster risks, but emerging risks from climate change and man-made hazards made progress appear more elusive. The Sendai Framework attempts to quantify measures of achievement to bring clarity to the implementation of disaster risk reduction policies. 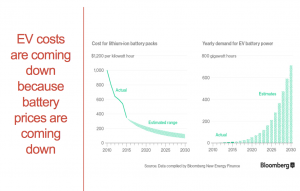 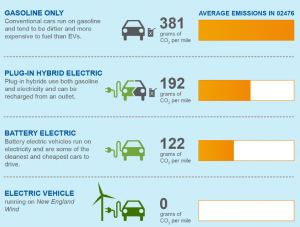 Local electric vehicle (“EV”) buyer’s groups offer significant discounts (as much as $10,000 off the manufacturer’s suggested retail price) on the purchase of select models of EV’s. Switching from a gasoline-powered to an EV can significantly reduce your household or business carbon footprint. The Environmental Protection Agency reports that a typical passenger vehicle emits about 4.7 metric tons of CO2 annually. Operating a battery-powered electric vehicle on basic service in New England, which is getting cleaner every year, produces 32% of the emissions of a gasoline-fueled car; the 68% reduction in CO2 emissions equates to 3.2 metric tons of CO2. Other options to reduce greenhouse gas emissions by 3.2 metric tons of CO2 annually are:

Clearly, the switch from a gasoline-powered vehicle to an EV is the easiest way to reduce household emissions by 3.2 metric tons of CO2 annually. The switch is easier to do with “range anxiety” becoming a thing of the past. New EV’s can run in excess of 100 or even 200 miles on a single charge. For more information about the New England EV buyer’s group, please click this link. EV buyer’s groups are available in Utah, Colorado and other states; you can see if there is one in your area by searching online.

TV5 Monde, the French television channel available on U.S. cable, had an excellent short program about disasters in California. Television news media tends to cover stories with engaging visuals; hurricanes provide dramatic visual images of homes underwater and high winds. Chronic disasters, such as drought and famine, tend to be under-reported. The result is the public often does not appreciate that human losses and economic damages arising from such disasters often exceed those of hurricanes and earthquakes, for example.

This particular program did an excellent job of highlighting the devastation caused by the drought in California, particularly its impacts on central part of the state, where the economy is based on agriculture. Sandwiched between two areas of extreme wealth – Silicon Valley to the north and Hollywood to the south, the challenges of central California have profound implications, particularly as most major crops grown in that area stock supermarkets across the U.S. If you missed the broadcast, you can see the program online.